Kilmore Community Council serves a scattered rural population in Argyll to the south of the town of Oban. 7 councillors represent around 260 electors. The area is largely open hill land with some forestry planting. It includes a fresh water loch, Loch Nell, and borders on Loch Feochan which is a large sea loch. The largest concentration of housing is in the Barran estate which has 36 houses mainly constructed in the 1970’s. 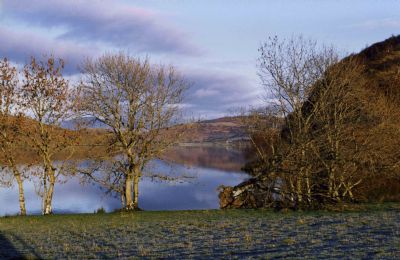 There are several large farms as well as other businesses such as a trout hatchery & smokery, a garden centre and  marina. There is a mixture of B&B, hotel and self - catering accommodation for visitors. Kilmore Highland Games are held every summer, attracting top athletes and dancers. Unfortunately we no longer have a local school or Post Office but there is a village hall (hopefully to be upgraded in the near future !) as well as the church which dates from 1876.

The original ruined church at Kilmore was built around 1450 on the foundations of an older and larger building, indicating that Kilmore was an early religious centre of some importance along with the neighbouring Kilbride church also now a ruin.
Several other sites of historical importance have been identified in the area e.g. crannogs in Loch Nell and a ‘Serpents Mound’ burial cairn near the loch.