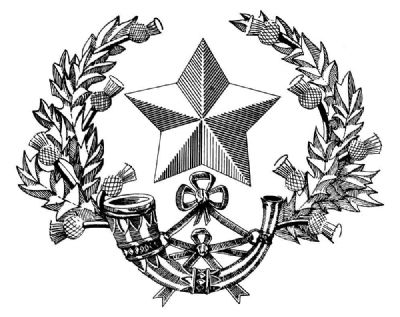 (Nobody Attacks Me With Impunity)

9.30am Regimental flag raised at the Douglas Victoria Bowling Green

2pm Conventicle at the Disbandment Cairn beside Castle Dangerous

4pm Buffet and social afternoon at Douglas Victoria Bowling Club
(ADMISSION BY TICKET, £3.00 AT THE DOOR)

Regimental flag will be raised at Douglas Victoria Bowling Club

1pm
Douglas Heritage Museum
Presentation of a Japanese Samurai Sword to the Douglas Heritage Trust from the family of the late Mr Fred Patterson who was gifted this sword after the hostilities in Burma in 1945
2 - 3pm
Conventicle - Cameronian Disbandment Cairn, Douglas

The Annual Cameronian Commemorative Service will be held on the 17th May 2009.
The order of the days service events has yet to finalised.
The tradition over many years included a church service in St Brides in the morning, a break for lunch, an after noon service at either the Cameronian Cairn or the Earl of Angus Statue and ending with a social gathering.

Cameronian Sunday
Annual Commemorative Service
SUNDAY 11th MAY 2008
St Brides Church, Douglas - 10am Service
THE CAMERONIANS (SCOTTISH RIFLES)
ALL RANKS REUNION
There will be a reunion for all members of the Regiment on Cameronian Sunday 2008 to mark the 40th anniversary of the disbandment of the 1st Battalion in addition to commemorating the raising of the Regiment, followed by the annual commemoration ceremony at the disbandment cairn.
Cameronian Disbandment Cairn, Douglas - 2pm Service
To view Carluke & Lanark Gazette pictures from this years anniversary service, click HERE

To read an excerpt from the Carluke & Lanark Gazette newspaper from this years anniversary service, click HERE

For more articles from the Carluke & Lanark Gazette click HERE

Click HERE for home video recording (YouTube)
13th May 2007
9.30am Cameronian Flag raised at Douglas Victoria Bowling Club
10a.m. Service at St Brides Church
1.45pm Gathering at Cameronian Cairn
2pm Service
Cameronian will be laid to rest during Conventicle
Cameronian Jim Ballantyne
© of Lindsay Addison
There will be a particularly poignant moment during next month's annual Cameronian Conventicle at Douglas.
As in past years, former members of Clydesdale's 'own' regiment, their families and friends will gather at the place of its founding over 300 years ago to commemorate the decades of service the regiment gave the country and to remember the literally thousands of Cameronians who died in action in wars the world over.
On May 13, the Conventicle will see one more 'Cam' finally laid to rest, the ashes of former Cameronian Association secretary Jim Ballantyne, who died last year, will be scattered during the annual Conventicle ceremony at the special regimental memorial cairn erected in the Douglas and Angus Estates.
The ceremony will take place at 2pm, preceded by the traditional morning commemoration Service at St Bride's Church in Douglas, starting at 10am.

Carluke & Lanark Gazette 26/4/07
Anniversaries
2nd August 2007
60th Anniversary of the Cameronians (SR) receiving the Freedom of Lanark
There will be a Sunday morning service held on the 5th August 2007 in the St Nicholas Church, Lanark
Cameronians Sunday 2008 will be celebrating the 40th Anniversary of the Disbandment of the 1st Battalion
Presentation to
Douglas Heritage Museum
June 2006
© of Lindsay Addison
Douglas Museum Sunday 4th June 2006

Opening address was by Mr Alan Halliday Vice Chairman of the Cameronians (Scottish Rifles) and Family Members Organisation. He welcomed all of those attending and what a pleasure it was to be there for the presentation of treasured family Cameronian items for safe keeping and donation to the museum.

Rifleman John McMinn donated a framed map of the 7th Battalion (Scottish Rifles) progress across Europe during WWII. Also a book on the Normandy Landings in June 1944.
© of Lindsay Addison
Sergeant John Todd Royal Logistic Corps presented service documents of his grandfather who was medically discharged in 1915 after being wounded in action he then reenlisted in the Cameronians (Scottish Rifles) and was discharged again when his previous discharge was noted. Also included was the 1915 equivalent of the family “allowance book” used by his grandmother at Govan Post Office in Glasgow

Louise, Carolyn and Dorothy Ellis donated their late fathers Battle Dress Jacket and webbing pouches. The jacket bore the insignia “MOUNTAIN” indicating the training undertaken prior to the assault on Walchern Island out side Antwerp in Belgium.

The closing address was taken by David Skidmore Chairman of the Douglas Museum. He spoke of the gratitude of the Museum for the donations and how the Museum benefits from the generosity of the donors.The Cameronian flag was raised on the flagpole at Douglas Victoria Bowling Club at appox' 9.15am. The morning service was held in St. Brides Church at 10am.
In the afternoon the service moved to the Cameronian Cairn in the Douglas & Angus Estate grounds near Castle Dangerous, where there was another service at 2pm.
Cameronian Sunday
Annual Commemorative Service
14th May 2006 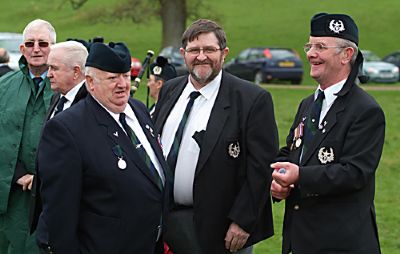 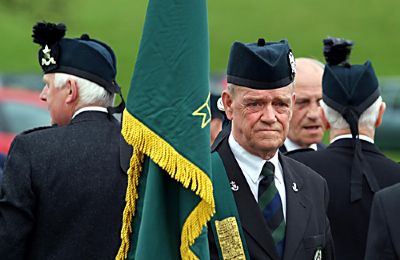 A moments reflection before the service
© of Lindsay Addison 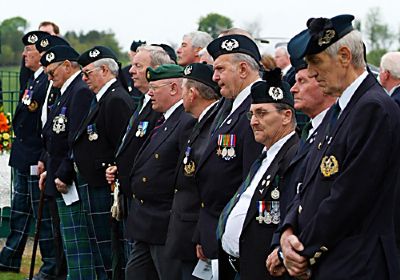 Cameronians on parade
© of Lindsay Addison 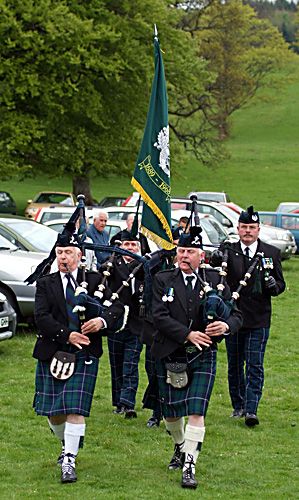 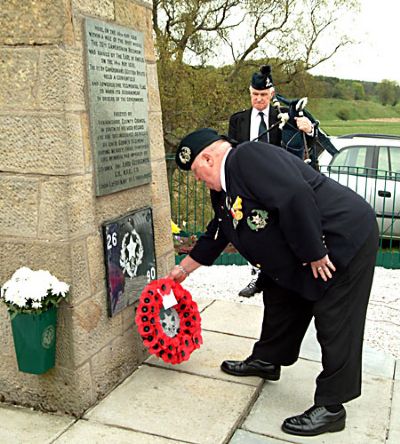 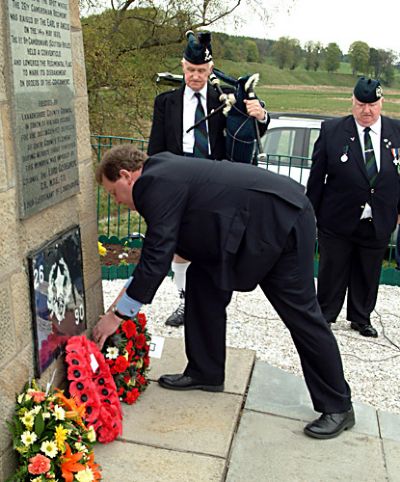 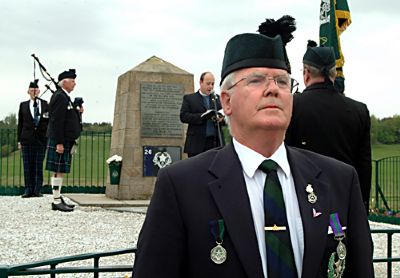 Cameronian Cairn
© of Lindsay Addison
The carved stone plaque on the Cairn reads as follows...
HERE ON THE 14TH MAY 1968
WITHIN A MILE OF THE SPOT WHERE
THE 26TH CAMERONIAN REGIMENT
WAS RAISED BY THE EARL OF ANGUS
ON 14TH MAY 1689.
THE 1ST BN CAMERONIAN (SCOTTISH RIFLES)
HELD A CONVENTICLE
AND LOWERED THE REGIMENT FLAG
TO MARK ITS DISBANDMENT
ON ORDERS OF THE GOVERNMENT.

ERECTED BY
LANARKSHIRE COUNTY COUNCIL
IN TOKEN OF ITS HIGH REGARD
FOR THE DISTINGUISHED SERVICES
OF THEIR COUNTY REGIMENT
DURING NEARLY THREE CENTURIES.
THIS MONUMENT WAS UNVEILED BY
COLONEL THE LORD CLYDESMUIR
C.B. M.B.E. T.D.
LORD LIEUTENANT OF LANARKSHIRE 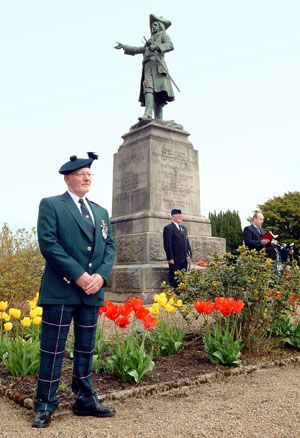 Cameronian Sunday
© of Lindsay Addison
THE 26TH FOOT, OR CAMERONIAN REGIMENT
was raised on 14 May 1689 in Douglas from the ranks of the Covenanters, taking its name from one of the most famous of their number, Richard Cameron, 'The Lion of the Covenant’.
The Covenanters had fought for - and won - the right to follow their Presbyterian faith and discipline when the Stuart kings tried to impose the Episcopal form of worship upon the Scottish people. Initially organisation of the Regiment was modelled more on a Presbyterian congregation than on normal military lines, and the men were puritans in faith and life. 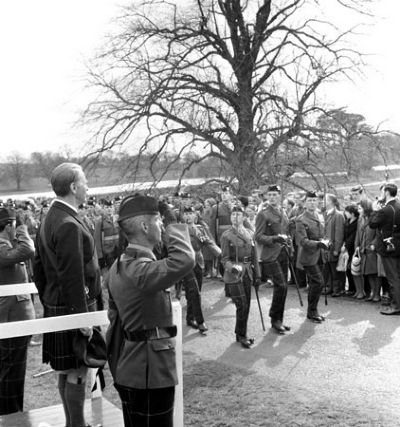 March past in the Estate grounds
A treetop view of the disbandment ceremony.
On 14 May 1968 a Conventicle was held and the Regimental flag lowered for the last time. The event is recorded on a plaque opposite the ruins of Douglas Castle.

The Earl of Angus statue was erected to mark the bi-centenary of the raising of the Regiment. It also commemorates the death of the Regiment's first Colonel, the Earl of Angus, at the Battle of Steinkirk (Flanders) in 1692. On 17 May 1992 it was given by the Cameronian Trust into the care of the National Trust for Scotland. 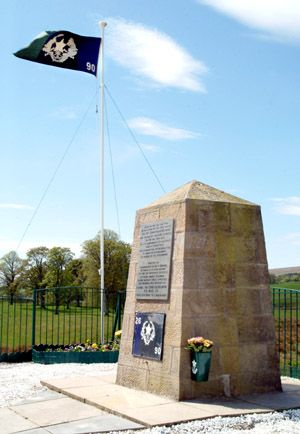 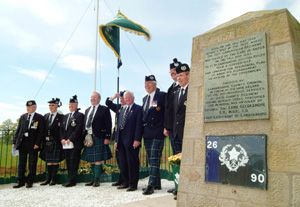 Office bearers at the 2005 service
© of Lindsay Addison 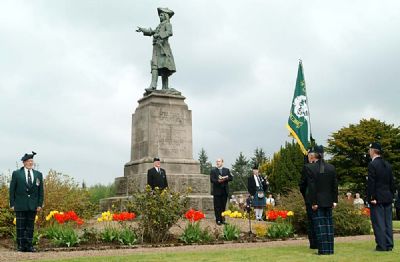 During 2005, a group of Dutch visitors payed tribute at the Cairn
© of Lindsay Addison
Cameronian Links

Army Museums (Cam's page)
The Bands of the Cameronians

Do you know who these fine Cameronian legs belong to...
and where are they standing ?
Please let us know by email, guest book or feedback via this website.
Images below are the strict copyright of Lindsay Addison
Click on the images to enlarge.